An article on Vincent's Club member Henry Anthony (Tony) Pawson - undoubtedly one of the greatest amateur sportsmen of the Twentieth Century.. Vincent’s Club member, Henry Anthony (Tony) Pawson was born at Chertsey, Surrey, on August 22 1921 and educated at Winchester and (post-war) at Christ Church, where he read History. He died in 2012, one of the greatest amateur sportsmen of the twentieth century, having played First Class cricket for Oxford and Kent, football for Oxford, Pegasus, and Charlton Athletic, and become England’s first world champion at fly fishing in 1984.

His Telegraph obituary is here and the Guardian obituary here.

The following is taken from FOBS, Friends of the Observer, and written by another Vincent’s member, Vic Marks (St. John’s College, 1974):

Vic Marks recalls his meetings with Tony Pawson, a self-effacing sportsman who was as modest about his many talents as he was hardworking as the Observer’s cricket correspondent.

Tony Pawson, who died on Friday at the age of 91, was a brilliant amateur sportsman and the gentlest of human beings.

Pawson was very well qualified to do both jobs. He played 69 first-class games for Oxford University and Kent, and was the most fleet-footed of batsmen. He hit seven first-class hundreds and could boast a very healthy career average of 37, though Pawson never boasted about anything.

In many ways, he epitomised the old-style English amateur sportsman, except that there was not a trace of arrogance in him. “My fortune in cricket was to play when the first-class game was free and fast-flowing and with a county as concerned to play attractive and sporting cricket as to win,” he wrote in his 1980 autobiography, Runs and Catches. His last game for Kent was in 1953. At Canterbury, they still talk about the harum-scarum joy of Pawson and Godfrey Evans running between the wickets.

Pawson also represented England at football in the 1948 Olympics and played two games for Charlton Athletic. But he was probably an even better fisherman than cricketer or footballer. In 1982, he was a member of the English fly-fishing team that won the World Championship, and he was subsequently awarded an OBE for his services to angling.

He was the most generous and mild-mannered of men, unfailingly polite and self-effacing. We would meet at Observer Christmas parties and he would talk about cricket as if he had barely played the game and was not sure what was going on.

But he did know, and by all accounts was rather more malleable and eager to help out than some of his successors in the cricket correspondent business.

But he did know, and by all accounts was rather more malleable and eager to help out than some of his successors in the cricket correspondent business.

When I first joined the Observer, I heard tales of Pawson’s readiness to satisfy the demands of those on the sports desk, especially when the football and cricket seasons coincided in September. They went along the lines of, “Tony, Yorkshire are playing at Headingley next week and there is an evening kick-off at Sunderland later that day. I don’t suppose you could cover both matches, by any chance?”

“Oh, that will be absolutely fine,” would be the reply. 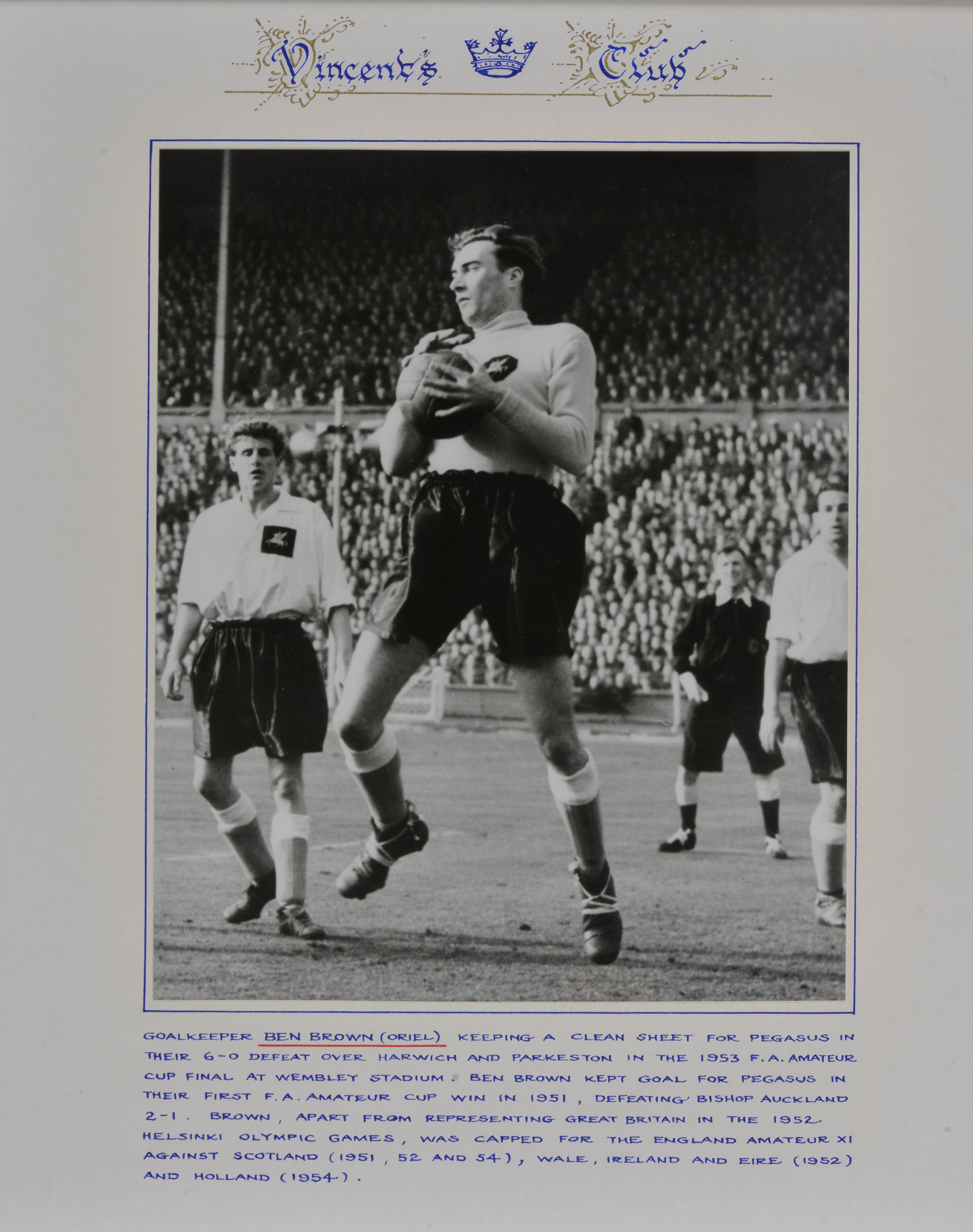 The Pegasus story is a remarkable one, hearkening back to the Corinthian spirit of the Nineteenth and early Twentieth Centuries. In this snippet from the 1951 Final, not only does Pawson get a brief mention, but so does yet another Vincent’s member, the goalkeeper, Ben Brown (Oriel), whose photograph is in the bar (right).

Footage from the Final can also be viewed on British Pathe here.

Details from the 1951 Cup Final programme can be viewed by clicking through the image carousel below:

On their way to the final Pegasus had to defeat Oxford City in a hard fought 4th Round tie. Pawson was injured, but Ken Shearwood is mentioned, author of the must-read book on Pegasus. Shearwood (Brasenose, 1947) is another Vincent’s member in this story, and another brilliant allrounder. Footage of this match can be viewed below:

There is also an excellent Guardian article on the topic which can be found here.

In the 1952-53 season, Pegasus did it again. Thanks to the hard work of alumni member Tony O’Sullivan (Keble, 1993), who kindly supplied much of the information for this piece, we have remarkable footage of the Amateur Cup Second Round Match, Pegasus v Gelding Colliery, from that year, in which Pegasus won 6:1. “In the cold early morning of January 23rd coal winding started at half past five instead of half past six at Gedling Colliery. Why? At 2,30 in the afternoon the answer was up at the colliery sports ground. 7,000 icy fans packed in to watch the colliery team take on the holders, Pegasus, in the 2nd round of the FA amateur cup.”

Winchester and Christ Church College, Oxford. Silver-haired, like Raich Carter, this speedy forward has built up an outstanding reputation in amateur football. He has played for Pegasus since the club’s formation and gained a Cup-winner’s medal with them in 1951. A former Oxford captain and a member of the 1952 Olympic Games party, he also plays cricket for Kent. Saw War Service with the Rifle Brigade. With D.B.Carr is top scorer with four goals in his club’s Cup bid. Outstanding in semi-final replay against Southall.”

Before the final at Wembley against Harwich and Parkeston, Pawson was taken ill. With a temperature of 102F, Pawson was advised not to play. Convinced that he would not be needed, he had eaten a heavy meal, but then found otherwise – and was plied at half time with brandy, whisky and champagne. Pegasus won 6-0.

Details from the 1953 Cup Final programme can be found by clicking through the image carousel below:

There is an excellent article written about Pegasus by Dilwyn Porter (2000): “Amateur football in England, 1948–63: The Pegasus phenomenon".

Dilwyn recounted an anecdote to Tony O’Sullivan, illustrating just what a modest person Tony Pawson was:

“One story I remember was him telling me that he had recently donated his 1952 Olympic blazer to Oxfam; he said that he had worn it when gardening, that it was very much the worse for wear and that he’d been surprised to learn that it was considered an item of some value.”

When reminiscing about Pegasus one should also mention Donald Carr, mentioned above, (Worcester, 1948). President of Vincent’s in 1951, Carr also played for Pegasus in the 1951 and 1953 Finals and was a fine cricketer.

Pawson’s Cricket statistics may be seen at ESPN Cricket.

The score cards of his two Varsity matches can be downloaded below. There are some remarkable players listed. 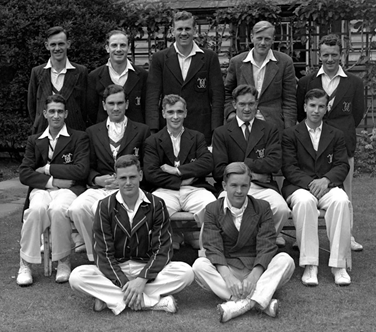 Pawson was also an excellent journalist, and for a brief period editor of The Cricketer.

Tony’s fly fishing should in no way be seen as either a secondary sport, or an afterthought to his cricketing and football prowess.He was amongst the first British to become World Champion, and for many it was for what he was best known, as his obituary from Team England Fly Fishing makes clear.

As a postscript, it is fitting to mention Tony's son, another Tony Pawson, and an eminent biochemist whose research revolutionised the understanding of signal transduction. More can be found on his Wikipedia page. Pawson wrote a very readable autobiography, “Runs and Catches”, published in 1980 by Faber and Faber. This is seemingly available at time of writing via this link.